The internet’s new favourite movie, Don’t Look Up, has divided opinions. Some feel the dark, satirical take on a world facing impending doom aimed too high but didn’t deliver a satisfying resolution. Others felt like that was kind of the point – and that this movie is simply the uneasy reflection of a similarly hopeless world.

However, as fascinating as the whole allegory-of-climate-change angle is, what I was really struck by after watching it was the less celestial calamity that seems to have already happened.

Because in just a few decades of advancements in communication technology, we now live in a completely different landscape when it comes to how society processes important information and interacts with each other.

So, let’s look at three ways Don’t Look Up highlights how our relatively new, yet all-encompassing tech culture has potentially doomed us all. While, you know…keeping it “funny and light”. 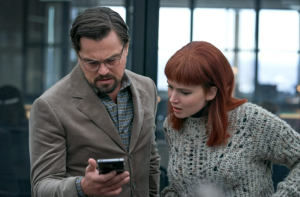 “You guys discovered a comet? That’s so dope. I have a tattoo of a shooting star on my back.”

These days, saying technology has changed/disrupted/transformed the world is pretty redundant (that’s an editorial tip for you there). Yet, despite literally living through it, it’s still hard to truly comprehend just how seismic the change has been – especially when it comes to communication.

But I don’t think we ever really merged tech into our society. I think it’s more accurate to say we now experience culture through the kaleidoscope that is technology.

Now, I don’t want this to come off as a Luddite’s rant. I do after all write thought leadership content for a tech-focused agency – I’m straight-up fascinated by these innovative times we’re living in.

And I think the movie fundamentally shares that positive view of technology too. The film opens with a quiet, yet majestic display of one of our most important inventions when it comes to the long-term continuation of life on this planet: a high-powered telescope that detects a cosmic threat millions of miles away.

It’s this marvel of science that gives the world in Don’t Look Up more than six months to prepare for the impending threat, a miracle in any other time. But it’s a miracle that’s only ever acknowledged by the astronomers at the base.

In a rational society, this film would be called Armageddon 2: Meteoric Boogaloo, and would feature an elderly Bruce Willis going back up into space to save the world one last time with the power of oil drilling experience.

However, as the movie shows, we live in anything but a rational world.

2. The world through the lens of memes

Memes are great. They have the uncanny ability to convey nuanced feelings through a language made up of shared cultural experiences. And they can inject much needed levity into our often-scary world.

However, the exact reason we love memes are also why they’re so dangerous. The word meme originally meant an “idea that infects your mind,” when Richard Dawkins first coined the term.

And that’s still mostly accurate to me – memes are incredibly contagious and effective at getting us to take on ideas without much critical thinking, however silly (or dangerous) they might be.

In Don’t Look Up, we see a society whereby memes are the final barometer of opinion. And regardless of content, success is judged by how well the person behind the message “trended” with digital masses.

J-Law’s character becomes a meme for mental instability after reacting “poorly” to the complete lack of concern shown by the hosts of the Daily Rip around the impending disaster.

In a similar vein, many have argued that a big part of why the climate change discussion finally managed to take hold in the public discourse had nothing to do with the increasing number of natural disasters or dire warnings from scientists.

Instead, it was because we had a leading person in the form of Greta Thunberg that media publications and content creators could craft a compelling enough narrative around long enough to hold the internet’s attention.

Because when you have an overload of information, the merit of a truth is not judged by its importance but its entertainment value.

3. The age of optional truths

“Not everything needs to sound so clever, or charming, or likeable all the time. Sometimes we need to just be able to say things to one another. We need to hear things.”

In many cases, the response to the attention scarcity media businesses face has been to try and only give audiences what they want – good vibes.

In Don’t Look Up, despite the bleak news the pair of scientists must deliver on national TV, the advice they’re given is to “keep it light and fun,” as it helps the medicine go down. And Leo’s character is regularly scolded for not “keeping it simple” or for “using maths”.

But what has resulted is a society incapable of taking its medicine at all, as there are simply too many sweet distractions for us to gorge on instead. The information we choose to value can’t always be based on simplicity or palatability, because many of the most important challenges we face are nuanced and uncomfortable.

The impact of tech on our culture falls into this uneasy category. No one, not even the tech gods who created these innovations, really know where we’re heading or whether we’ll ever get a grip on this beast before it devours us.

But, like a fictional meteor hurling through space towards us, or a literal climate disaster nipping at our heels, the first step towards change is learning to grow comfortable with the uncomfortable.

And maybe the key to our future is to stop seeking out the happy endings we so crave and sit with the unsettling feeling that unless something meaningful changes, we’re all in real trouble.