Education institutions bottom of the class in tech

This year marks 20 years of me learning within the UK education system.

It was 1999 when I first started school. The London Eye had just been erected, Serena Williams had won her first Gram Slam title, and Tony Blair was Prime Minister. The only technology we had in the classroom was a computer to be used during ‘fun time’.

Fast-forward to 2003, and we had interactive white boards, which are essentially just digital chalk boards.

Secondary school, from 2007-2014, was not much different. Interactive white boards, laptops in occasional lessons, and a clunky internal shared system. And when I went to university, technology in learning had still not surpassed the permittance of laptops in lectures – despite paying more than £9000 per year.

For the two decades I’ve been in education, not much has changed. It’s far behind the fast-paced progressive innovation we’ve seen in other industries.

There are a few reasons for this in my opinion.

State schools just don’t have the budget to be buying and updating technology. They also don’t have the time to transition teachers to tech-based teaching. As a result, devices end up collecting dust in the stationary cupboards.

There’s also a huge amount of snobbery around using tech in education, especially in universities. There’s a prestigiousness in doing things the ‘traditional’ way. Even at a top university, I sit at an 80-year old wooden library desk and count myself lucky to find a plug.

But students and start-ups are no longer waiting for institutions to make the innovative changes internally. The reliance on laptop and internet use over the past year and a half has welcomed in a load of new AI-driven apps to help studying.

If you use social media, and the algorithm knows you’re a student like me, you’ll be met with a wave of ‘apps your teachers don’t want you to know about’ videos.

The tools highlighted are by no means complex. In most cases they’re very basic. But they serve a valuable purpose in speeding up the amount of time it takes to learn and research. It leaves students more time to digest content, form their own views, and conduct critical thinking – the areas of learning that engender the higher points.

And these apps are all free or operating on subscription models, bypassing the requirement for schools to invest.

Students are using it. Start-ups are producing it. Schools and universities aren’t up-to-date with it. The whole thing screams untapped opportunity.

Here, I’m going to outline some of the best apps I’ve encountered during my studies. They demonstrate exactly why more attention needs to be paid to student experience, and just how far behind education institutions have fallen.

Streaming platforms such as LifeAt have gone viral on social media. They provide a different environment for students to work in, which has been helpful when learning from home.

Students can access the website for free, use a Pomodoro timer, and choose a setting to work in. Yesterday, I took some notes while working from a café in Seoul, the day before it was on a pier in California at sunset. It gives a nice bit of escapism from the same familiar scenery of home.

What also works so well with these streaming platforms is that it can apply the same pressure as you would have working alongside classmates. Students can study alongside random people round the world in pre-recorded videos. On LifeAt you can even study with famous K-pop bands such as BTS, Blackpink, and Stray Kids.

You may think this sounds basic, but it’s proved hugely effective. It prevents FOMO (fear of missing out) and stifles feelings of isolation. It’s a development of the popular ‘Study with me’ style videos on YouTube.

Since LifeAt went viral, the platform owners have said they’ve incurred huge server costs as they never expected it to be so popular. There’s clearly a demand here. 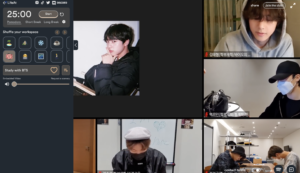 Just me videoconferencing with BTS for a study session.

It can be hugely overwhelming to construct an argument, when you’re writing an essay, like I am right now. Topics are often so saturated with scholars’ opinions, it can be difficult to know who is arguing against who, and what you should focus on.

Connected Papers is a simple and free app that makes research easier.

The platform enables students to upload a relevant paper for analysis. Connected Papers will then pull together a visual of what other research this paper interacts with.

Ultimately it’s the digital equivalent of looking through the bibliography of something you’ve read. However, Connected Papers also outlines the timeliness of the research, the level of relevancy, and how many times it has been cited within an argument. 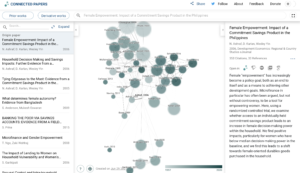 The difficulty of reading – especially at university level – is massively underestimated. Professors often give students more reading than is possible to do. They allocate students this amount because they don’t expect them to read articles cover-to-cover. Reading is an art, that requires skimming, prioritising, and efficient notetaking, which can be hard when students can’t ascertain what’s important.

It’s an AI platform that scans your academic articles, creates a summary of the main points, and highlights arguments throughout the piece.

The time this platform saves in figuring out what to highlight is hugely beneficial. It gives students a real opportunity to formulate their own opinions and argue their points – what university-level education is actually about.

Scholarcy shows huge potential for content digestion tools. Currently, it can only be used on recent academic PDFs, so going forward it will be exciting if this kind of technology can be applied to older material and alternative formats.

Scholarly allows students to have a free trial, but it works on a subscription model of £7 per month. 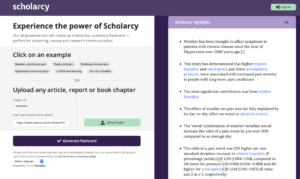 I’ll be honest, being a copywriter, I was dubious of Grammarly. Could a tool such as this really pick up errors effectively?

I started off with the basic free version, which covered punctuation, grammar, and basic tweaks to sentences… and it delivered. Grammarly left no stone unturned.

I was so impressed, in fact, I decided to take the financial plunge, and buy the monthly subscription which is a steep £21 a month. Not to put myself out of a job – but it was worth it.

Students are able to select what target audience they’re appealing to, what tone they’re trying to achieve, and what they’re trying to accomplish from the piece. So far, it has elevated my writing to the next level. It’s picked up on passive sentences, suggested synonyms for repetitive words, and suggested alternative ways to write the sentence and adjust tone.

I think this tool will continue to be relevant to students. And it has a massive role to play in the current class gap in education.

Those with academic parents have had the luxury of having their essays proofed by those that know what the curriculum demands. Many students who are the first generation to go to university, such as myself, have not had this advantage. Grammarly is the substitute for this. 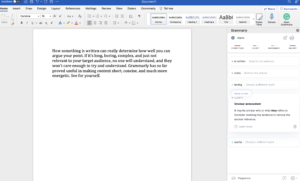 Now, dictation software is nothing new. Otter.AI and the speech-to-text function on word has been around for a while, but not in education.

No phone policies at schools have ruled out transcription within classrooms. But home learning and laptops have made a space for them. Many students are now using such services to ensure they don’t miss important information within their notes.

Of course, transcriptions are still a bit ropey. I still encounter sentences with rogue words or mistranslations. So the opportunity will now be for dictation software to make moves in improving the quality of their software, while keeping the cost to students accessible.

In my mind, education institutions are bottom of the class when it comes to technology. And this is often what we focus on when looking at the industry.

These aren’t perfect, but they’re catering to the real needs of students. And they should be given the attention they deserve.

It shows an appetite for tech that many institutions are yet to acknowledge, which means it’s time for education to start revising.