It was Freedom Day on Monday.

That may have escaped those of us self-isolating in our rooms while the world burns, but yes: Monday was the day we celebrated being free.

So how do brands sell us freedom?

We evolved in the open plains of Southern Africa. The first hunter-gatherer societies were totally meritocratic and egalitarian. But when we started settling down, building cities, crowning kings and adopting religions – that’s when things changed. For almost all of civilization’s 15,000 year runtime, society has been defined by class divides and inequalities.

When information was scarce and people were tied to the land, we didn’t question those much. Sure, the underclasses were prone to revolting, but the structures of power were far more heavy-handed than they are today. For a peasant to even look a king in the eye meant death. 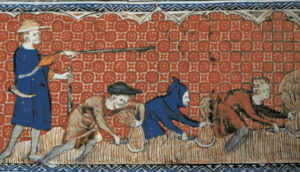 But today, rebellion against the system is everywhere. Want to watch a Hollywood action star take down evil CEOs poisoning the planet? Yep, there are hundreds of films like that. Want to discover the latest ways that Hillary Clinton created Covid in the basement of a pizza parlour? That “info” is just three clicks away.

We consume the idea of anti-corporate rebellion – even when it’s hand-fed to us by those very same corporations. Think of any recent movies, TV shows or ads: you’ve got the Marlboro Man, bravely eking out an existence on the American frontier. You’ve got Star Wars, where the forces of good rebel against the evil Empire – owned by the Disney Empire. You’ve got Amazon’s ‘The Boys’, with their message of corporate irresponsibility – brought to you by Jeff Bezos.

And you’ve got Pepsi’s inspiring fight for equal… something? 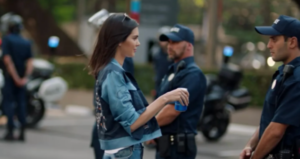 It’s a funny thing. In 2020, anti-capitalism is big business. You know those Guy Fawkes masks some people like to wear on Bonfire Night? Yeah, those are made in China at 40p a pop, then sold for a fiver. Someone’s making a decent profit there.

And that’s dandy, until you remember that the company is worth 4.5 billion dollars.

In a society where people often feel unmoored from time and community, freedom has become a product.

We want escape: to disconnect from the everyday. We want rebellion: to fight for a just cause. We want meaning: to feel like a part of something greater. And the entire point of advertising is giving people what they want. You see it EVERYWHERE, from travel posters to whiskey bottles to YouTube videos.

Ultimately, the paradox is this: could our search for freedom be making us all less free?

Here are a couple of examples of how brands tap into all this.

1. Jack Daniel’s sells the freedom of a simpler time on the bustling London Underground

If you live in London, you’ve probably seen these: 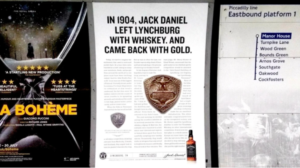 It’s usually a washed-out old-timey image and a wedge of copy filled with phrases like:

“Old Jack wasn’t much for reading, but he could sure as hell comprehend a glass of whiskey’

‘We got a saying down here in Lynchburg: a goose in the barrel is worth twice a frog in the tree’

This is the ‘Postcards from Lynchburg’ campaign, originally launched in the 1950s, and now running in only one place: the London Underground. It plays on our longing for authenticity: an attachment to something we’ve never truly experienced – which is why we’re so captivated by the romance of small communities in the great outdoors.

All this campaign does is sell that idea back to us – even though the reality of the 19th Century Deep South was hardly all that fun.

2. Brands sell the freedom to celebrate Pride – only in certain countries

Sometimes, a picture says a thousand words. These are Renault’s social tags for Pride month this year. 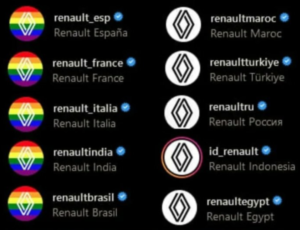 It seems like brands are reluctant to advocate for freedom in places that aren’t free. 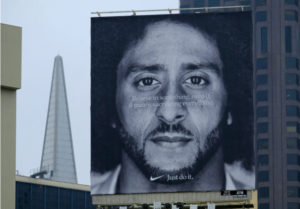 In the world of Nike, there’s nothing stopping us all from just getting out there and doing it, damn it! But the story of how this global behemoth of a company came to be known as one of the greatest champions of progressivism shows us something different.

When Colin Kaepernick became ostracised from the NFL for taking the knee during the national anthem, Nike came very close to dropping him from their “sponsor roster.” He hung out in limbo for more than a year, while the company kept their relationship quiet for fear of angering the powers that be.

As the Trump years continued, it became clear that the political climate was changing. Anti-racism became a household cause, and brands began to feel comfortable speaking openly about systemic discrimination. Nike decided that dropping Kaepernick was a bad PR move – and finally embraced his message as part of their core ethos.

The result was actually a fantastic campaign that resonated with a lot of people. But it did so because this was a message we wanted to hear: a fuel for our activism. 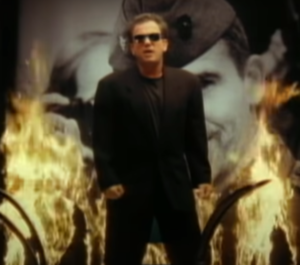 Neither did Billy, to be fair.

Ultimately, brands change because people change. But it doesn’t have to be that way.

So perhaps the better question is: instead of just selling freedom, how can brands help make the world more free?

We, as marketeers, have the power to change minds and influence people. But consumers have the buying power we’re constantly searching for. They’re nuanced individuals, capable of making their own choices. They have buying freedom.

We need to be brave enough to identify right from wrong – and stick to our guns.

Like Dove, who sold us the freedom to be beautiful back in 2004 – when the tabloids were busy shaming celebrities for putting on weight.

Dove identified an untapped emotion in women across the world, and spoke directly to them. 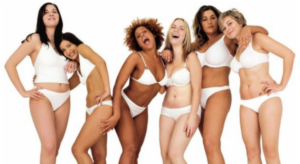 And we loved it!

There’s no progress without challenging what came before.

Some brands have been doing just that for decades – putting out messages that have only recently entered the mainstream. Lush, for example, have been crying out against animal testing since the 90s, with a greatest hits library that includes this… uplifting PR stunt in 2012. 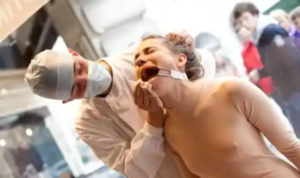 Pictured: 50 shades of messed up

It was a piece of public performance art, designed to challenge public apathy about animal testing. And it definitely did so, while drawing waves of intense criticism over perceived portrayals of sexual violence. Eh… like it or not, you can’t deny it got people talking.

But here we are, in 2021: Lush has spent millions supporting scientists that are developing alternatives to live testing. Cruelty-free cosmetics are now a viable commercial reality. In fact, most people won’t buy a product if they’re aware it’s been tested on animals.

And brands can advance that change. After all, they’re made up of human beings – with the freedom to decide whether their ethics depend upon governments and market forces. Am I advising every company to take a cast-iron political stance in their marketing campaigns? Definitely not.

But look at Patagonia.

They’ve built a brand on the back of their love of the Great Outdoors. The freedom of the trail. It would be all too easy to use the call of nature – and profit from it – without giving anything back. Loads of brands do it.

But Patagonia doesn’t play that game. 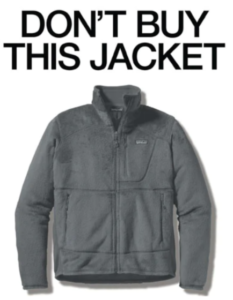 That’s right – to tackle the role of consumerism in giving our planet the smackdown, Patagonia told us to think twice before we buy. Every piece of clothing we consumers purchase emits several times its weight in greenhouse gases and draws down copious quantities of groundwater.

It was a great reminder that we’re free to buy or not to buy. It might come as a surprise, but we don’t have to acquire anything. It’s the freedom NOT to make a purchasing decision. And it smells like fresh air.

And because action isn’t limited to what messages you can put out (here’s looking at you, Nike), Patagonia also tax their own profits – giving 1% of everything they make back to environmental organisations.

So what can we learn from all this?

Well, we can start by rethinking what we say, and how we say it.  How we live up to our brand values. How what we do reimagines reality, better. How we return freedom to people – not just sell it.

And if it feels like we’re the only ones who dare to speak out against the way things are, so much the better.

If we’re going to have any real impact, we need to make our move – before it’s cool.