What a wild year! With the world on Airplane Mode, everything we thought we knew about creativity and storytelling changed in an instant. We saw a mass shift of consciousness and an acceleration of social change – and although the journey wasn’t easy, it filled us with new ideas and new stories to tell. We adapted our thinking, struck out into uncharted territory and produced some brilliant work.

Here are some of our favourites.

Square and Mastercard: Connecting the Falklands

‘One of the stand-out moments of this year was standing on a remote Falklands beach, filming penguins to star alongside local business owners in a gorgeous short film. When Square and Mastercard first brought card payments to the islands, we never thought we’d make this epic journey. And we certainly never thought Jack Dorsey himself would end up interviewing sheep farmers over Zoom.’

‘We developed a glorious visual identity for this landmark IoT security venture. With playful block colours, dynamic moving icons and a spanking-new site architecture, we utterly transformed the user experience – making the complex goals of the project feel engaging, accessible… and even fun!’

‘We took this hilarious animated video for cybersecurity firm Mimecast all the way from start to finish – creative development to art direction to post-production! The end result is gloriously silly, and I’m grateful for a client that shares our vision and is willing to push the boat out. It was a true joy to make.’

‘This year saw the launch of Harvard’s very own podcast, featuring leading voices from across our agency – and our industry – exploring the theme of creating lasting change. It’s a remarkable content series that deserved remarkable upfront design. I developed the graphical elements of the series into a bold visual identity that feels quintessentially Harvard – but also part of something entirely new. ‘

‘This is one of the projects that kept me up at night, dreaming and scheming. Personal finance start-up Hyperjar needed to carve out a riotous new identity to carry its message of responsible spending – and we came up with the Money Monsters. Four unique and lovable characters who make it harder for you to manage your money, and who speak in riddles and rhymes. I just love them.’ 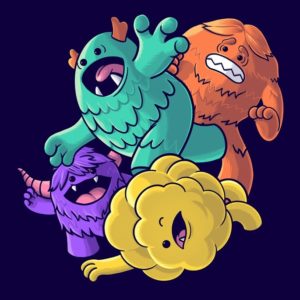 _VOIS: We Move the World

‘Vodafone Intelligent Services is Vodafone’s engine room, moving all their data across the world. They wanted to build an identity for themselves. Something that would make them instantly recognisable – a banner they could rally behind. We created an immersive, cinematic visual world based on blades of light, alongside a new name and logo, and launched it for thousands of employees in four countries.’