We tried out Snapchat’s Spectacles – here’s what we learnt

As you’ve probably heard, Snap’s Spectacles launched in the UK last week. Naturally the Harvard team was keen to get our hands on a pair and try them ourselves to find out what the fuss was about. We’ve spent the last few days playing around with them – here’s what we’ve learnt…

Getting hold of them

Snap hasn’t gone down the traditional route of big-bang launches, product demos, midnight store openings and queues round the block – the route that most consumer tech businesses have followed since Apple popularised this approach over a decade ago. Instead, it’s chosen a deliberately cooler, edgier, lower-key method: pop-up vending machines unveiled in quirky locations, with countdown information available online but mostly spread by word of mouth on social media. In the UK this meant a vending machine by the London Eye, where we could just turn up, put our card in (the Spectacles aren’t cheap at £129.99) and get a pair. When we went – around 8pm on a sunny Friday night – there was someone in front of us in the queue and someone behind us, but hardly a big crowd waiting impatiently. For those who were there, though, the fun and excitement was obvious. This was all about novelty – trying out something they’d read about for months but not been able to try themselves until now.

Spectacles come in a funky triangular yellow case, inside a see-through plastic tube.

The yellow case is also where the Spectacles get charged. So when you open them for the first time, you’re automatically being filmed for a 10-second burst. Which is a clever way of showing you how the product works straightaway – most of us can figure things out (and understand its potential) from there. Spectacles have a button on the top that you press to film for a 10-second burst of video. Once you’ve paired your Spectacles with your Snapchat account (by looking at a snap code on your phone), you can then sync the video to your Snapchat and away you go. Just like normal photo-based Snaps, you can choose which videos to publish, add text and filters, and save them down to your phone if you like.

Here's what Spectacles looks like when you press record. 10-second video burst, with flashing light to show you it's filming. pic.twitter.com/XodNSzrU1e

As glasses wearers ourselves, the first thing we noticed when we put Spectacles on was – of course – that they are not prescription. That makes them a little problematic for the roughly 40% of the population who already wear glasses. But then this isn’t really intended to be a mass-market product. It’s not another iPhone – at least, not yet. By their nature, sunglasses aren’t going to something you carry around with you all day, every day, in the UK. That would seem to limit their use to outdoors during the summer months. (No wonder they were launched here in early June.) There’s plenty of sunshine in California where Spectacles were invented, of course, as well as in other places where Snapchat is big, like Brazil, Australia and Italy. But maybe there could be a non-tinted version available in future for those of us in cloudier countries? Nonetheless, the first time you sync Spectacles with your phone definitely feels magical. Walking round in the sunshine and pressing a button on your glasses to capture a 10-second video – of, say, your dog chasing a tennis ball, your friends messing about or your child playing – is definitely faster and less intrusive than having to take your phone out and hold it up each time.

Testing out #Spectacles at lunch. pic.twitter.com/6hvaiqTCxt

In a smartphone world, filming like this doesn’t feel “weird” any more. It just moves the camera lens up to eye-level, which arguably feels – and is – more human or natural than standing with a phone between you and the object. And the flashing light on your Spectacles shows you you’re being filmed, which is more transparent than with a smartphone too. Even if you’re not in Spectacles’ target market – primarily people aged 16-24 – there’s no denying that they are a very impressive piece of kit. It might only be a pilot project, and more of a marketing effort than a genuine money-spinner, but the concept definitely works and it looks a heck of a lot cooler than previous wearables. Lots of thought has gone into the design and packaging, and there’s lots of clever attention to detail too, like the rainbow-coloured receipt you get out of the vending machine when you buy a pair (a reference to Snapchat’s famous rainbow Lens – but you knew that, right?). 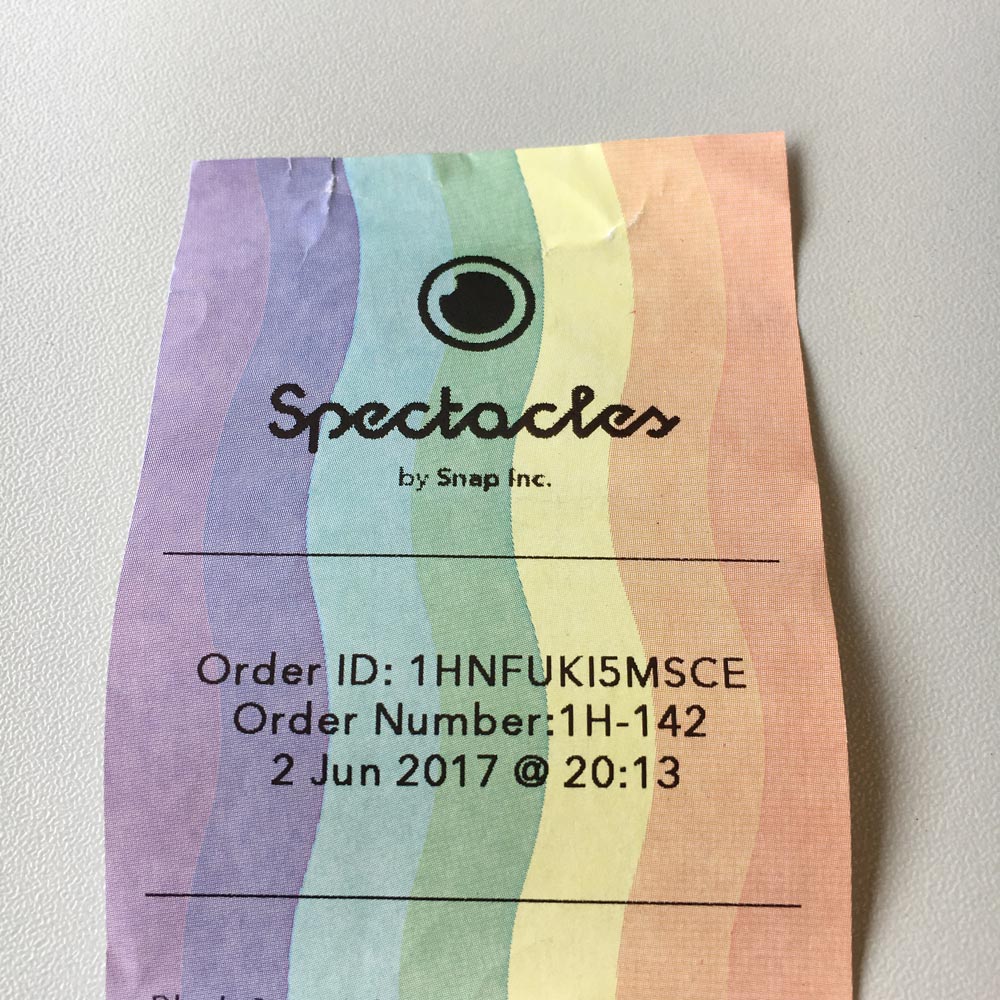 Whatever else it is, Spectacles must be the most sure-footed debut move into hardware, from a company previously only known for its software, for a very long time. Image: Spectacles